I gotta say baking has never been my thing. It’s just too much precise measuring, timing, etc. Plus, it’s TMI! I don’t feel comfortable knowing how much butter, shortening (what the heck is this white substance anyway!) or sugar is in my desserts. Sometimes, ignorance is bliss. 😉 However, this Fall, I’ve been kinda “forced” to since I went to Hollin Farms in Delaplane, VA last weekend.

So, what do I do when I have bags of apples? Gotta bake!

First, we baked a cinnamon crumble apple pie. Recipe is from Epicurious.com.

I had never baked anything but store-ready-made-frozen-dough cookies but making this pie was a lot better than I had imagined. The best part? the crumbles!

Next, we baked “apple brownies”, recipe of which is also from Epicurious.com. 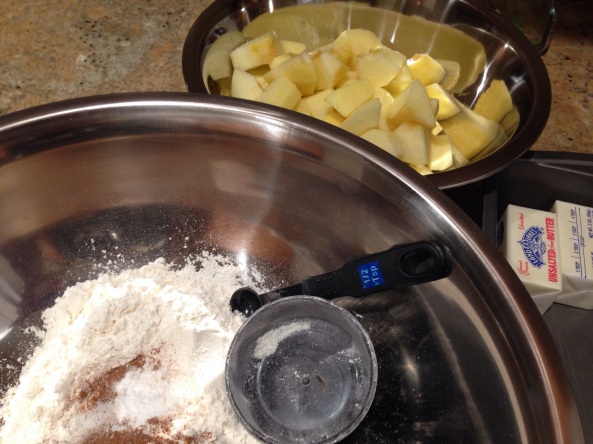 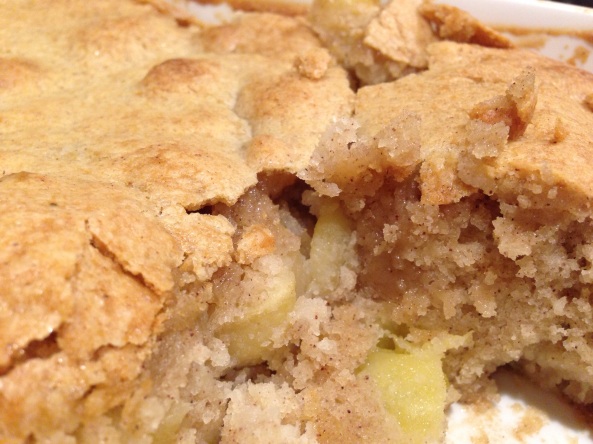 This is actually my favorite so far. Crispy on top but super moist inside. Just the right amount of cinnamon. I brought this to work and the girls were literally moaning! #Foodgasm 😉

And tonight, we made some “apple peanut butter cookies”. That’s right. Apples + peanut butter! This recipe I found on Taste of Home. 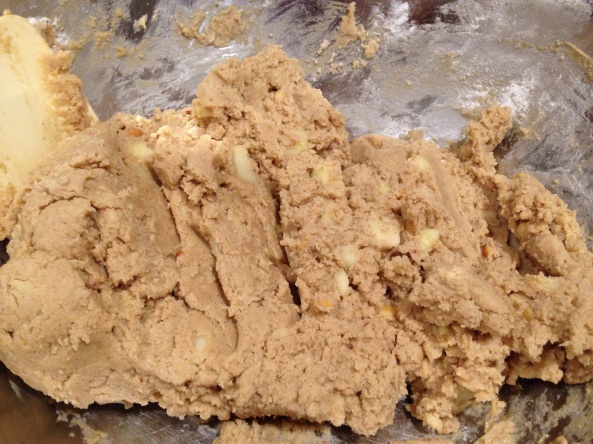 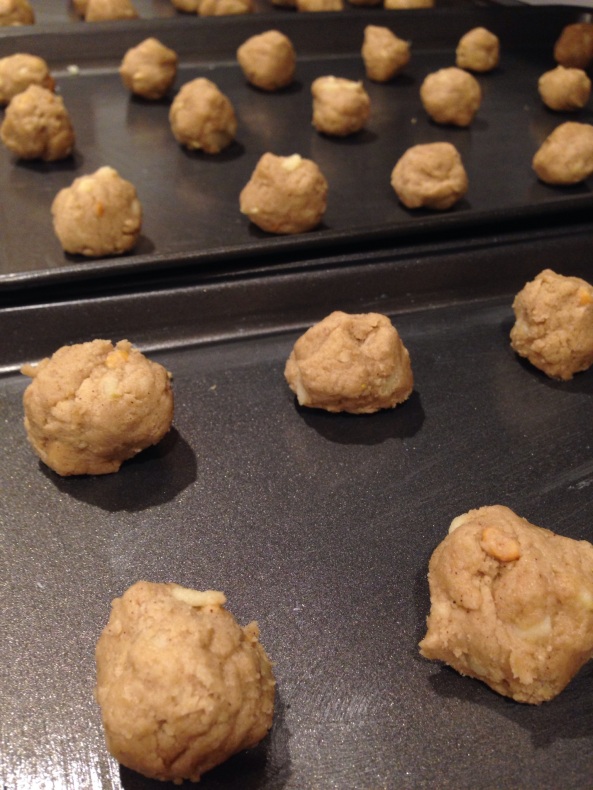 Personally, I am not a big fan of peanut butter but the hubby is. 🙂 They came out great. Very moist inside. The recipe says “grated peeled apple” but I chopped the apple with a knife. That way, the cookies definitely have more “texture” IMO.

After baking the whole week, I did not feel like cooking tonight so we ordered some Chinese food. Guess what the fortune cookies said: “Apple” and “Sugar”! It’s a sign. We still have about a dozen of apples and that means we gotta keep baking! Bakers gonna bake, bake, bake, bake, bake~ Bake it up! 🙂

The picture is from the website of a famous Korean franchise restaurant called “Bulgogi Brothers.” They haven’t opened one in the States yet unfortunately. 😦 What you see up there is Bulgogi Bibimbap. “Bul” literally means fire, “gogi” meat, “bibim” mix and “bap “rice. It’s self explanatory except for the ‘fire’ part. That came from how it’s cooked and for more information, click the link above. 🙂 Because I am too excited to reveal the recipe that’s so easy! There are more than a few different kinds of Bulgogi’s but this one is the most common and easiest one that you can make. The key is to get all the right ingredients. After that, it’s a piece of cake!

You need thin slices of (usually) sirloin. I do have hard time finding this cut of beef at regular supermarkets. If that’s the case, go to H-Mart or an Asian grocery store nearby. They should have it and it doesn’t matter if it’s frozen. Get 1lb of the meat.

<Marinade – unit:tablespoon> FYI, everyone has a different recipe and this is my mom’s.

Meat can be really chewy and here’s the ultimate meat tenderizer! Pureed KIWI! Use only half of the whole kiwi, though. Your bulgogi won’t even have big chunks if you put the whole thing – half joking. 😉 If you don’t have a kiwi, you can use half of a pear. This will add a nice tone to your marinade as well.

Now, you can mix everything together. You can put a little ground pepper as well. When you marinate the meat, you can also add onions as in the picture above. Let it sit for a couple of hours. You can even wait a day to cook it. Once you are ready to stuff your face with this deliciousness, cook it on a pan. No oil is needed. Add mushrooms (button mushrooms or shiitake mushrooms are usually good), which go perfectly well with bulgogi. Cook it until it’s ready, which doesn’t take too long.

One thing about my mom’s recipe is that “Coke” part. You can add a little more water instead of that but her bulgogi does taste gooooooooooood. 🙂 Like I said, everyone seems to have his/her own bulgogi recipe so do some experiment and find your own recipe! It’s another fun part of cooking, right? 😉 Serve it over white sticky rice maybe with some kimchi. That’s one complete meal! Enjoy!

That’s right. It’s so heavenly, juicy, mouthwatering, scrumptious… You get the point! This is “Pickle Chicken”.

Have you ever finished a jar of pickles and poured the leftover juice down the drain? SHAME ON YOU! No more waste in the house! How do you make pickle chicken then?

That’s it. There’s no salt and pepper. There’s no certain amout of anything! Just pour the pickle juice in the tupperware and put chicken thighs there. Done. Marinate the chicken for a day or two. You don’t have time? It’s okay. Today, the chicken was marinating just for two hours while we were out playing tennis and it was still dºeºlºiºcºiºoºsºo! I personally prefer thighs to breasts (hmm… did that sound weird?) but it’s totally up to you.

The question is “what kind of pickles do I use?”. Any regularsupermarket  dill pickles will work I think. But today, of course, I used the homemade pickles that we made last month (click to see the posting). Think about it. That salty, vinegary, sweet juice makes perfect sense to cook chicken with! 🙂

Super easy recipe. Great cooked in oven. Greater cooked on your grill. See if you have an old jar of pickles right now and try! 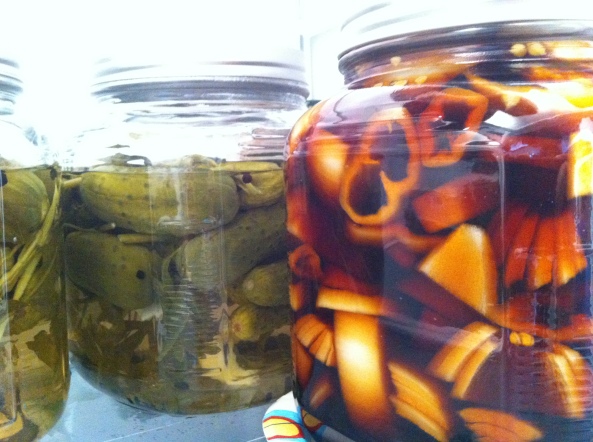 There’s nothing easier than making home-made pickles! The pickled cucumbers are traditional ones that you see in the supermarket. However, the sexy, dark one on the right side is what I call “Grandma Pickles“! You know why they are great? Even my grandma, who is a notorious cook, can make these pickles and they are so yummy! So anyone can make them and they taste heavenly especially with BBQ’d meat! I usually put these pickles on the table when we have samgyeopsal! That’s a cut of pork belly and it’s gonna have to be another seperate post, if not, a book!

You can put them all in a pot and boil. When it gets to a boil, turn it off and wait a couple minutes for it to cool down. You wanna pour the yumminess onto cut-up veggies when it’s still hot. Obviously, use a glass jar. 😉

You can pretty much pickle ANYTHING. In the picture are banana peppers (which I love!) and onions. I put a couple of garlic cloves and a few pieces of jalapenos for the flavor as well. My mom sometimes uses carrots, cucumbers and radish too, which are all great. If you don’t like anything too salty, add a half portion of water. 😉

What’s different here is the thing called SOJU! Soju is a what I call “Korean vodka”. It doesn’t really have any strong taste but Korean people for some reason seem to love this. It usually has 20% alcohol and people drink it out of shotglasses, usually in a “bottoms-up” pace. They say “Gun-Bay” or “One Shot” before they empty their glasses. How old you are really matters in Korea so if you are younger, you have to pour soju with two hands. It’s all about showing respect. It’s a dollar in Korea but you gotta pay at least $5 a bottle here in the states, depending on where you are. Most ABC stores in VA carry them so maybe get two bottles and use one for your pickels and the other for some dinner entertainment!

If you do make my GRANDMA PICKLES, keep me posted! Let me know how they come out 🙂